I'm often asked about the microphones I use for stereo field recording. A picture being worth a thousand words, these two photos might be all that's needed to satisfy your curiosity: 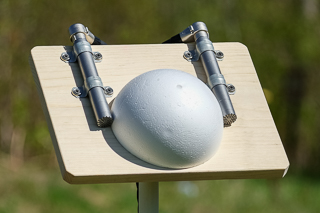 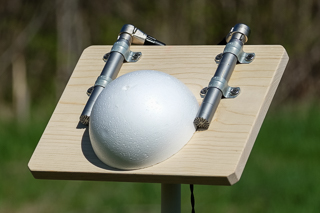 Like most people in the pro audio industry, I learned over the years how to work with a handful of common techniques for creating stereo audio: AB, XY, M-S, ORTF/NOS, Blumlein, Jeklin, binaural, panning of multiple mono tracks. Each has certain strengths and weaknesses; each has its place in the grand scheme of things.

During the 1990s I experimented casually from time to time with ambient field recording using some of these traditional techniques. In 2004, after a long hiatus, I took up the challenge much more seriously, beginning with something that seemed to work fairly well for me in those early days: a pair of Shure Beta58 microphones that I owned, situated in an ORTF array. I also built a couple non-traditional experimental mic rigs that year. Those were colossal failures. I learned a lot from them, but the memories are too embarrassing to recount here.

At that time I also joined the Nature Recordists e-mail forum (previously on Yahoo, now on groups.io), where a lot of discussion soon developed about Shure WL183 lavalier microphones. These small omnidirectional electret condenser mics seemed to be well regarded by several group participants, so I ordered some and began tinkering with literally dozens of stereo mounting configurations using inexpensive, readily available materials.

Little by little, through seemingly endless sequences of trial and error and hundreds of hours of careful listening, I began to discern many of the subtleties I was hearing from these and other stereo arrays, and how they translate to both headphones and loudspeakers. The more I listened, the more I wished I could capture greater depth and spaciousness in my field recordings.

In March 2006 I posed a question about this to the Nature Recordists group. One leading participant responded with a key insight about human auditory perception that triggered an important "ah-hah" moment for me -- a critical "what if" hunch -- that soon led to a crude configuration similar to the one pictured here, using forward-facing Shure WL183s attached to small parallel wooden barriers, with the microphone capsules approximately 5.5 inches apart: 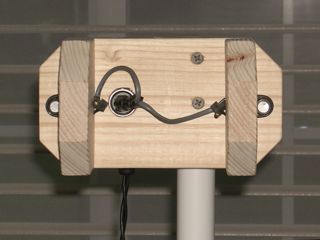 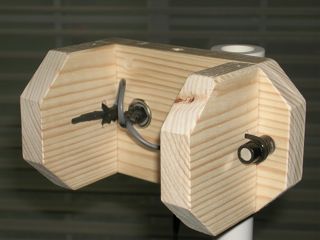 Spaciousness and depth were so dramatically improved that I immediately abandoned all previous experiments and adopted this as my new default approach.

Unwilling to spend thousands of dollars for some of the most highly esteemed microphones on the planet, but still wanting to move toward higher quality and lower microphone self-noise in my recordings, I paid close attention when members of the Nature Recordists group began discussing AudioTechnica's modestly priced AT3032 mics (now discontinued, replaced by the new AT4022). These small-diameter omnidirectional studio condenser microphones have extended frequency response characteristics, high SPL handling capabilities and very low self-noise (documented by group participant Eric Benjamin to be much lower than the manufacturer's published specs, and actually 5-6 db lower than many of those most highly esteemed and high-priced microphones on the planet).

I bought a pair, mounted them in a head-spaced parallel barrier array, and was very pleased with the results. Below are three variations on the theme: 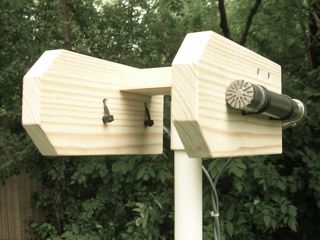 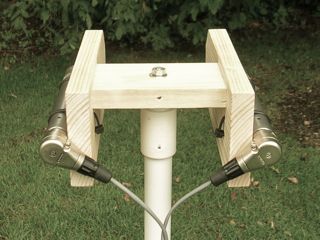 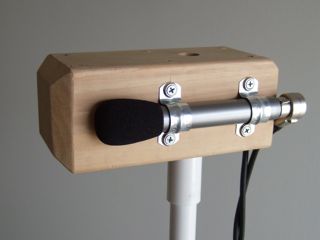 Stereo localization in these arrays is derived mainly by the setback distance from microphone capsules to the leading edge of the barriers. Barrier size is also important -- too small and the desired barrier effect is diminished, too large and unpleasant mid-frequency "bumps" begin to appear. The distance between the microphones will also affect the perceived width of the soundstage; there's room for variation here, but roughly "head-spaced," more or less, makes undeniable good sense and yields excellent results. Any angle between the barriers, inward or outward, will have its own effect. Each of these variables overlap with and affect all the others, so one must season to taste... wisely.

This "quasi-binaural" approach has become widely used by nature sound recordists around the world. I prefer it over coincident stereo arrays because it captures important arrival-time differences that aid in spacial imaging. In addition, these small-ish barriers seem to stabilize the stereo field, enhancing clarity and transparency by nearly eliminating those "wavy" microphone interactions that usually accompany traditional M-S, ORTF/NOS and spaced omni arrays. Being highly phase coherent, these barrier arrays also deliver excellent mono compatibility. Most importantly, this approach seemed to capture considerably greater spaciousness and depth than any other traditional stereo technique I had worked with up to that time.

Chronic tinkerer that I am, however, I stumbled upon a massive improvement in the spring of 2008. That's when I began experimenting with a radically unorthodox bottom plate structure that, to my ear, seemed to further enhance spacial definition -- not just a little, but a lot.

Almost every recording I made for the next several years was captured with some variant of this "winged-array" concept: 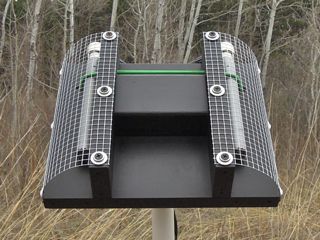 The Last and Final "Tweak"

After a few years of working with these impressive rigs -- and deeply enjoying it -- one remaining weakness slowly revealed itself. I began to detect slight, ever-so-subtle anomalies across the soundstage -- tiny dips, skips and jumps as a sound source would move from one side to the other.

I pondered the problem casually for a year or so until one day a potential solution dawned on me that turned out to be absolutely brain-dead simple and effective: I tried replacing the parallel wing structures with a six-inch half-sphere barrier between the two microphones. This modification resolved all the anomalies I was hearing and rendered a much more stable center image without spoiling the beautiful depth and spacial definition I so very much appreciated:

Here is a sample recording captured with this rig:

As you can see from the two photos above, construction is so simple that almost anybody should be able to build a rig like this with very little trouble. The pix should be all you need to get started. I recommend the SmoothFoam six-inch craft ball for this, as the density seems to be just about right. You'll have to cut it in half, but it has a nice equator to help guide you.

I have tested my AT3032 mics with an eight-inch half-sphere barrier. To my ear, that seems to be too big; I think six inches is just about right. On the other hand, my much smaller Sure WL-183 mics seem to favor a proportionally smaller half-sphere barrier, say, 4-4.5 inches in diameter. Your mileage may vary.

1) These winged arrays have a definite upward orientation, so it's a good idea to tip them forward toward your sound source. 2) These assemblies tend to generate a frequency "bump" in the low midrange (approximately +3db or so at approximately 1.8 kHz or so, depending on many variables). This requires a bit of corrective EQ in post-production. For some, this might be a deal-breaker. For me, it's a small price to pay. 3) Counterintuitive as it may seem, cardioid microphones can also be used successfully in these arrays. Cardioids mounted this way seem to deliver somewhat crisper articulation of individual sound sources than omnis, but also a slightly "flatter," less spacious image. I sometimes prefer this for certain indoor recording situations. Here's one example, captured in a large concert hall. It's a short excerpt from the premier of an original composition by my good friend Jason Harms, performed by student musicians at Bethel University in St. Paul, Minnesota:

This simple voice/guitar recording was captured with the same rig in an empty church sanctuary:

To my ear, the PBB approach, with its flush-to-boundary microphone orientation, fails to capture key spacial cues that are a specialty of the winged arrays. The PBB effect strikes me as considerably "flatter," less natural sounding and much less vibrant. Nevertheless, the concept has gained traction with many nature sound recordists who appreciate the crisp articulation and deep "reach" of the PBB rigs.

Here, as in most of life, we end up grappling with trade-offs and compromises, where choosing "this" often means giving up "that."

(Note: Australian wildlife sound recordist Vicki Powys has kindly posted instructions for this and other DIY arrays, along with photos and detailed drawings, on her website. Thank you, Vicki!)

1) The photos and descriptions on this page are intended merely to suggest broad concepts and show some construction possibilities. I offer no plans or specifications, as each unique combination of microphone model and construction technique will require its own adjustments.

2) Microphones whose housings are considerably larger than the actual capsule elements just don't sound right when placed adjacent to boundaries or barriers. Proceed with caution and "try before you buy" if possible.

3) As always, the ancient Hebrew Scriptures prove to be correct: "...there is nothing new under the sun." Two years before I began my own experiments, musician, scientist and environmental sound recording pioneer Bernie Krause had already published a similar "quasi-binaural" technique in his wonderful 2002 book, Wild Soundscapes: Discovering the Voice of the Natural World. (I also recommend Bernie's brilliantly insightful 2012 release, The Great Animal Orchestra: Finding the Origins of Music in the World's Wild Places.)

4) This pursuit has taught me something else, entirely unexpected and unrelated. It has given me important clues about how innovation occurs in every human discipline. I've experienced for myself, in a dramatic way, how flashes of insight or inventiveness can come seemingly from out of nowhere when pondering (one might even say obsessing over) a problem or seeking a better way to do something.

This is a common human experience, but we don't often pause to consider it. Those, like me, who accept the Hebrew/Christian Scriptures as having Divine authority, might find it interesting that the Old Testament prophet Isaiah attributes even the most basic human ingenuity and knowledge to the Creator of all things:

Give ear and hear my voice,
Listen and hear my words.
Does the farmer plow continually to plant seed?
Does he continually turn and harrow the ground?
Does he not level its surface
And sow dill and scatter cummin
And plant wheat in rows,
Barley in its place and rye within its area?
For his God instructs and teaches him properly.
For dill is not threshed with a threshing sledge,
Nor is the cartwheel driven over cummin;
But dill is beaten out with a rod, and cummin with a club.
Grain for bread is crushed,
Indeed, he does not continue to thresh it forever.
Because the wheel of his cart and his horses eventually damage it,
He does not thresh it longer.
This also comes from the Lord of hosts,
Who has made His counsel wonderful and His wisdom great.

Oh, the depth of the riches both of the wisdom and knowledge of God! How unsearchable are His judgments and unfathomable His ways! For who has known the mind of the Lord, or who became His counselor? Or who has first given to Him that it might be paid back to him again? For from Him and through Him and to Him are all things. To Him be the glory forever. Amen.